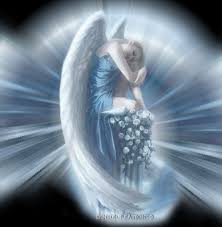 Do you believe in Angels? Have you ever had an encounter with one of these entities? Many people have and have been changed since their encounters. Here’s an interesting article written by Stephen Wagner about personal encounters with these creatures.

WHO ARE THESE mysterious beings? They seem to come out of nowhere just when they are needed, have just what you need to solve the problem, then vanish quickly without a trace. The people who encounter them are often convinced that they are angels – spirit beings who temporarily take on human from to lend a hand in time of need. Skeptics say, of course, that they are just helpful but ordinary people. Yet the reports are surprisingly consistent: no one knows where these helpers come from, and they disappear in an instant when you’re not looking.

Equally frustrating to understand is that the help they lend is very often in relatively mundane circumstances. A stuck car, for instance. You would think that if a heavenly being was going to materialize to help a human (we could call it a miracle, couldn’t we?), it would be in far more important matters than fixing a flat tire.

And who knows; perhaps they do assist in such important matters. And if they are spiritual beings, who are we to question their motives?

Whether you believe they are angels or not, here are some fascinating reports of these mysterious benefactors.

Angelic assistance isn’t always as mundane as fixing a flat; sometimes it is literally life saving. Twenty-one year old Kimberly was inner-tubing on a back woods Wisconsin river one summer day. “I was in a shallow, but fast part of the river, when my inner tube flipped out from under me,” Kimberly says. “The water was only shin deep, so I ran after my tube. While I was running I fell into a deep spot and got caught in a hydraulic, where water flowing over a rock or other obstacle flows down, then back onto itself in an eruption of whitewater.

“I was sucked down and sucked in over my head. I struggled to reach the surface, which was mere inches away! I grabbed at the water, trying to propel myself upward and out of this water trap. When I realized my efforts were fruitless and I was about to drown, I felt an intense peacefulness and serenity fill me with a warmth I can’t describe.

“Suddenly, someone grabbed me by the wrist, and in one tug had me out of the deep water and standing in ankle-deep water nearby. I caught a glimpse of a blonde woman in a red flannel shirt, but when I turned to thank her for saving my life, there was no one there.”

STRANGER ON THE METRO

There certainly are many kind people in the world who don’t hesitate to help strangers in need – especially children. But was it just a kind man young Brian encountered on an April afternoon in 1999… or was he something more? Patty H. tells us that she along with her husband, their son Brian and daughter were riding the Metro Link on their way to a St. Louis Cardinals baseball game that day.

“Brian had a Sharpie marker and baseball cap that he was planning on get autographs with,” she says. “The Metro Link stopped at Busch Stadium. All of us got off the train. Brian noticed that he dropped the marker and went back on to retrieve it. The doors to the train closed and it left the platform. My son was still on the train! Brian was only 10 years old at the time and it was his first time in the big city. We were just frantic.”

All the family could do was wait for the train to loop back to the station, which took about 35 minutes. When the train finally made it back to the platform, Brian had an interesting story to tell. “While he was on the train,” Patty says, “a black gentleman sat next to him and began to talk to him. He asked him questions and reassured him that he would be fine. Brian said he and the man were the only two people on the train. Yet when the doors to the train opened, the man had strangely disappeared. He did not go out the door. He would have had to walk past us. We believe it was my son’s guardian angel.”

You have your doubts? Eight years later, Patty tells us, this same mysterious man visited their son’s hospital room when he was direly ill.

Here is one of those miraculous roadside assistance stories. The interesting thing about this one, according to Amanda, is that the helpful stranger looked like Jesus himself. Her experience took place in Pottstown, Pensylvania.

“I have never been the real religious type,” Amanda says. “As a matter of fact, I often made jokes about the Bible as well as Jesus. After having compared Jesus to a fictional character one night, I drove with a friend of mine to another friend’s home. Rain was pouring and the weather was unbearable. Somehow my vehicle landed in what appeared to be a river in the middle of the road I was traveling. I tried to call a couple of male friends to try to push my vehicle out. No luck. I sat crying next to my car at 3:00 a.m. in a wooded area, with absolutely no homes present.

“An elderly man came out of the woods, resembling what one would assume to be Jesus: tall, skinny and bearded. He said that he would go get his tow-truck and pull my car out of the rapids. I sat in my boyfriend’s vehicle as the old man drove a tractor over to my vehicle. The license plate on his tractor read: ‘You have a friend in Jesus.’

“Was this a coincidence,” Amanda wonders, “or was Jesus showing me how non-fictional he really is?”

IN THE ARMS OF AN ANGEL

Sharon’s six-month-old daughter was miraculously saved from catastrophe one day when they were out shopping. Sharon and her friend had taken the baby to the mall, pushing her around in a stroller with all the necessaries: diaper bag, purse, etc.

“My biggest challenge in the malls and stores was navigating the escalators,” Sharon says. “Being the cautious type, I would always fold up the stroller and carry it down the escalator in one hand, baby in the other. But this is a dangerous balancing act in itself. I’d seen other people just roll their strollers onto an escalator, ride it down and roll it off at the bottom. I’d always doubted my ability to pull it off, but on this day, against my better judgment, I decided to try it.

“I didn’t hear my baby cry. As I scrambled to my feet, I feared the absolute worst. My slightly mangled stroller (one wheel was bent) had skidded about 10 feet from the bottom of the escalator. My baby wasn’t in it. But standing right behind me, holding her, was the man who’d gotten on the escalator behind me. She was unhurt and completely calm. He handed my daughter to me without a word. I looked away for just a second, then turned back to him to thank him from the bottom of my heart and ask him how he’d gotten her out of the stroller. But in the time it took me to look away and look back again, he was gone.”

Every night after work, Alicia would drive out to her ill grandmother’s house to take care of her. You could say she was an angel herself. One night, however, an accident brought Alicia in contact with a being she believes was her guardian angel.

“Being as I drove this every night, I know my cell phone doesn’t receive service though that stretch of road, and I am a very cautious driver and always locked my doors,” Alicia says. “On this night in 2001, I was making the drive as normal when the car in front of me slammed on their brakes. When I slammed on my brakes, my wheels locked and I couldn’t slow down… I rear-ended the car going 50 mph.

“The whole front of my little Saturn caved in up to the steering wheel and my air bag didn’t deploy, so my head was slammed into the steering wheel. I was trapped in my car and my head was bleeding. Just then my car door opened (and like I said, I always lock my doors), and a black gentleman was there. He said, ‘Alisha, you’re going to be ok. Please let me have your phone and I will call your mom.’ I gave him my cell, thinking to myself that it’s not going to work because of the area we’re in… and how did he know my name? The gentleman called my mom and I heard him say, ‘Alisha was in a car accident. She will be fine. You need to come and be with her though.’ He told her the road I was on and hung up.

“Then he held my hand and told me, ‘You’re going to be alright. It’s not your time to go yet.’ I knew the moment he held my hand that I was ok and I felt a peace come over me. I heard the sirens from the fire trucks and the gentleman said, ‘It’s my time to go. You’ll be alright; just have faith.’ He left and the fireman came to check me out. They started asking me questions and asked me if they could call someone to meet me at the hospital. I told them that a black gentleman had already called and that my mom was on her way. The fireman told me that no one was around and checked my phone; he said no call had been made. Just then my mom pulled up (in hysterics, of course) and the fireman just looked at me.

“They transported me to the ER. I had cuts, black eyes and whip lash, and I couldn’t walk for three days, but after some physical therapy I recovered like new. I later asked my mom about the gentleman who called her that night. She said that nothing registered on her caller ID when the call came through, and all she could tell me was the gentleman who called her sounded like a black man. I know in my heart that I had my wonderful guardian angel with me that night. I also found out later that no one was hurt in the vehicle that a rear-ended… but they never saw anyone at my car until the firemen arrived.”