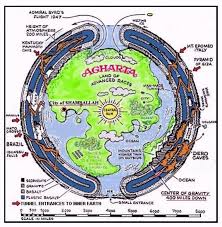 Hollow Earth. The very title envisions exotic races thriving in vast cities below our very feet. Ancient peoples and unknown flora and fauna no surface dweller has ever seen before. Hollow Earth had also been a point of focus by the nazis regime as well, to gain new power for domination on a new level. Explorers have also made this fantastic place a priority over the years to prove this place actually exists. Below is a collection of links from many different sites with a good deal of very interesting information and more.

Begin your journey into the Hollow Earth realm:

Nazis and the Hollow Earth

Did Hitler’s Nazis believe in a hollow Earth – and did they escape to the planet’s interior after the war?

Expeditions exploring deep, mysterious tunnels and caves in various parts of the world return with strange tales of subterranean civilizations, cities and advanced yet ancient technology.

Another Human Civilization May Live Inside Earth’s Hollows

Legends say that an entry to the underground realms was located somewhere in the North, and legendary ancient tribes living on the planet centuries ago used the entries to have a good shelter under the Earth’s surface.

The expanding Earth idea has been around for a long time, but the driving force was missing, this site says. This is where the Hollow Earth theory comes in.

Giants in the Hollow Earth

Actually takes you, page by page, inside the hollow Earth, describing the lost city of Agartha you’ll find there. Yes, they’re serious.

German Submarine U-209 Made It to Our Hollow Earth

A letter from Karl Unger, a German crewman from the U-209 submarine, claims that the vessel made it to the hollow earth soon after World War II.

The Greys: UFOs From the Hollow Earth

Are aliens – the “greys” – actually beings from the interior of our own Earth? They are, according to this convoluted theory.

A short history of the hollow Earth theory, from Edmund Halley’s proposal to the Nazi expedition in 1942.

Some photos and illustrations accompany this basic article about the hollow earth theory, and claims of those who have been inside.

Hollow Earth in the Puranas

The Puranas make several comments in relation to the hollow Earth which should not be taken lightly. Although they are but comments in passing, their impact should be recognized.

A list of newsletters and books on the subject, some of which are no doubt out of date.

This site includes photographs of the Earth from space showing the “hole” at the North Pole! Plus, Admiral Byrd’s diary.

The crux of the hollow earth theory is that the earth is a shell with walls about 800 miles thick. In the polar regions there are holes 1,400 miles across, with edges that curve smoothly from the outside of the shell around to the inside.

International Society for a Complete Earth

A group dedicated to understanding hollow earth theories, founded in 1977 by Captain Ritter von X (an anonymous name at his request).

An Interview with Timothy Green Beckley

The UFO author gives his opinion of the “Shaver Mystery” and the rumors of underground entrances to the hollow earth.

The moon is hollow, this page says, and that’s why it has weird gravity effects.

In spite of his scientific and historic achievements, there are lesser known theories that suggest Byrd was onto something that went far deeper than his exploration of the surface world.

Traveler to the Interior of the Hollow Earth

Colonel Billie Faye Woodard of the United States Air Force says he worked at Area 15 and that he visited the hollow interior of the Earth six times – 800 miles deep.

Theories of the Hollow Earth

Overview of the various hollow Earth theories, including science fiction, inverted Earth, caves in the Earth and more.

Here is an extensive list of underground bases and what is currently known about them, culled from research. Includes a map.

This site provides a list of entrances that allegedly lead down to underground bases around the world.

The Unnatural Museum: The Hollow Earth

A good rundown, with illustrations, of the various theories that the Earth is hollow, and that a subterranean civilization exists there.

… or The Luminous Lodge presented the idea of a subterranean matriarchal, socialist utopia ruled by superior beings who had mastered the mysterious energy called the Vril Force.